U.S. demand for fresh blueberries reached an all-time high in 2019, and to meet this increased demand, both domestic and global production of fresh blueberries have trended upward. U.S production for the fresh market climbed 284 percent since 2000 to almost 372 million pounds in 2019. 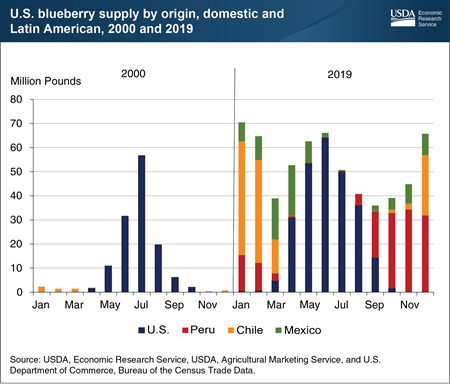 Blueberries have different production seasons across different regions throughout the year. To support year-round demand of consumers, imports have grown and now not only supply blueberries in the off-season months of domestic production, but increasingly in the in-season months as well.

Fresh blueberry imports from Peru surpassed those from Chile and accounted for 30 percent of the imports in 2019.

This chart and detail appear in the Commodity Feature in the Economic Research Service’s Fruit and Tree Nut Outlook, March 2020.