Lower volumes but better quality in sight for Chilean blueberries

An estimated 98,228 tons of fresh blueberries are expected from Chile for the 2022-2023 season, according to the Chilean Blueberry Committee. The projection was made within the framework of the “Blueberries” block carried out at Fruittrade 2022. Peak arrivals to the US market are expected around the last week of December and first week of January.

Earlier during the year, Chilean fresh blueberry exporters reached an agreement to implement a charter service to the U.S. market called the “Blueberry Express.” The service includes charter ships by virtue of which a percentage of the cargo will be transported in refrigerated warehouses which would guarantee the maintenance of the cold chain.

Additionally, the services at the port of destination would ensure a rapid delivery to customers, optimizing the arrival of the fruit to the consumer. Volumes estimated for the 2022-23 season have declined 8% from last season, when exports reached 107,187 tons.The primary cause of the fall in volumes is the industry’s rigorous focus on supplying only premium quality blueberries to its export markets. 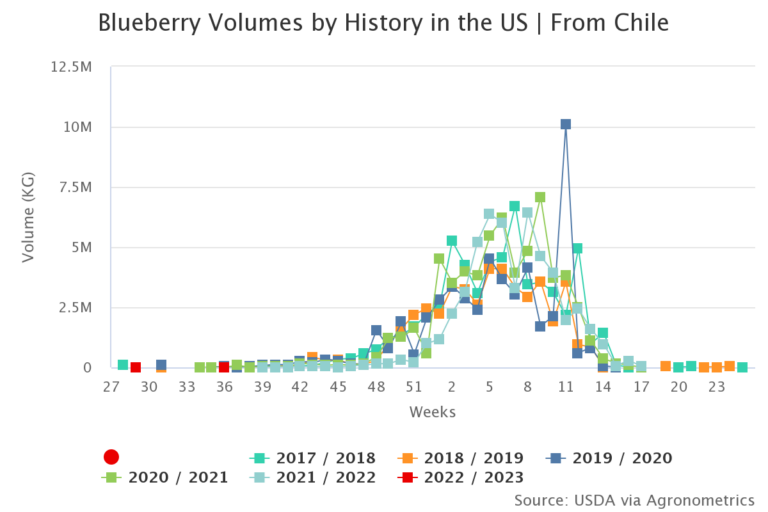 Exports of frozen blueberries are expected to rise, reaching 60 thousand tons or more, according to Isabel Quiroz, executive director of iQonsulting. “This represents an increase of more than 14% compared to the previous year, maintaining the growth trend and also the diversification of markets. The frozen blueberry from Chile maintains the sweet flavor of the fruit, which, together with a majority percentage of manual harvest, favors the quality that is appreciated and recognized in the world”, she added.

Prices in the last season saw a sharp decline between weeks 3 and 8 (from $32.33 per package to $12.75 per package), before plateauing at $10.50 per package in weeks 9 and 10. In line with the expected decrease in volumes this season, pricing could be expected to be roughly similar or slightly higher compared to the previous season. 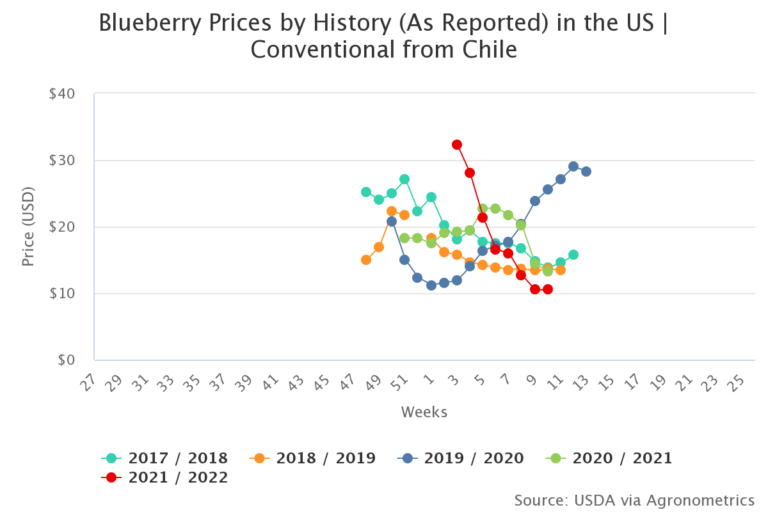 Lower temperatures have enhanced fruit quality this season and increased availability of labor has increased efficiency within the supply chain. In order to maintain the competitive edge and rising demand for Chilean blueberries, development of new technological tools should be prioritized.

For this reason, a study was carried out to evaluate and appraise the shelf life and quality of eleven varieties (both new and traditional) currently used in the Chilean industry for exports. The purpose of this study was to determine the potential postharvest life of these varieties using refrigeration and the use of perforated bags as base technologies during two simulated periods of transportation and marketing.

“Our number 1 priority is delivering the highest quality blueberries to our international markets. Planting and exporting the right varieties is key, ” says Andres Armstrong, Executive Director of the Chilean Blueberry Committee.